Prior to 1924, chapel services were held in various buildings on the Fort Snelling installation. A request was made by the Sunday school children that a Post Chapel be built. In a formal request by the Garrison commander, the War Department granted permission. The Chapel was built at a cost of $54,725 covered by popular subscription. It was dedicated on June 10, 1928.

Chaplain Frank C. Rideout who had been an inspiration for its construction stated, “Primarily the Chapel will be a house of worship, but it will be much more – it is a unique and distinctive Minnesota memorial, a splendid monument to the patriotism, the moral earnestness and the convictions of the people of this state. It will be a perpetual reminder of their appreciation of those who made the supreme sacrifice in all our great wars. It will provide a shrine where the friends of those who have died for America may come, as on a holy pilgrimage, and offer up their thanks to Almighty God for the precious gift of friends who have been so fondly loved, and are now lost awhile.”

The military post was deactivated in 1946 and later the Chapel was scheduled to be demolished to make room for the highways which now crisscross the area. The Chapel fell into disuse and was subject to vandalism.

Dr. Clifford Ansgar Nelson, widely known for his service as Chaplain to the Minnesota Senate and President of the Minnesota Council of churches, decided that if the original purposes of the Chapel were to be kept alive, a foundation would be needed. The Fort Snelling Memorial Chapel Foundation was formed in 1966 as a 501(c)(3) organization. Dr. Nelson was officially called to serve as Chaplain of the newly formed Foundation. The first services under auspices of the Foundation were held on February 12, 1967. 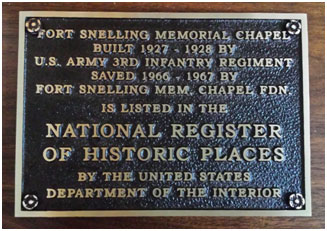 The Chapel houses more than 80 memorials such as: a stained glass window that bears the coat of arms of the Third Infantry Regiment, oldest in the U.S. Army, who was once stationed at Fort Snelling; windows that honor pioneer military leaders and churchmen, including Gideon and Samuel Pond, who came to the fort in 1834 as missionaries to the Indians; many historic flags on display all carried by Minnesotans in battle; wood carvings, regimental symbols in the pulpit and lectern; a marble baptismal font (carved from her original tombstone) is a memorial to Elizabeth R. Snelling, daughter of COL Josiah Snelling who designed Fort Snelling and served as it commandant from 1820 to 1824. Her remains are interned outside the front door. The Chapel also houses an original three-manual pipe organ that was a gift of the Veterans of Foreign Wars of Minnesota and its Auxiliaries, and the original chimes, of the state’s American Legion Auxiliary.

The Chapel today continues to uphold its original purpose of being a house of worship and serves as a unique and distinctive Minnesota memorial to those who have served and continue to serve our country, especially those that have made the supreme sacrifice. 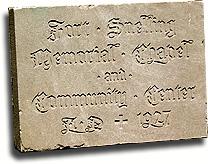 The purpose of this Foundation shall be:

1. To promote and encourage public interest, appreciation and understanding of Fort SnelIing Memorial Chapel in Fort Snelling State Park, Minnesota, as a spiritual center of religious, historical and patriotic activities.

2. To maintain a program of Christian worship of non-denominational character in connection with Fort Snelling Memorial Chapel by means of preaching and teaching the Word of God and administering the sacraments, to engage a Chaplain as its pastor and other personnel, and to maintain such activities as are customary to any religious body.

3. To solicit and receive contributions and donations of money and property for the furthering of the aforementioned purposes

“Where the Veteran is Remembered”